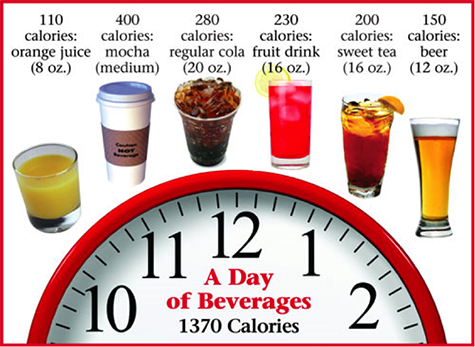 When coming up with a healthy eating plan for losing weight, there’s a tendency to think only about food and not consider drinks, sauces or gravies. There are calories lurking in liquids as well, which is why it is important to consider everything you consume when trying to shed pounds.

Drinks are one thing that can increase your caloric intake quickly. Sugary soft drinks and alcoholic beverages provide little nutritional value, yet can include as much as 400 extra calories per serving. Dieters should skip these beverages and drink water or unsweetened tea instead.

You may think that since fruit juices are low in fat, they will automatically be low in calories. That’s not necessarily the case. For instance:

Of course, all things being relative, fruit juice is generally going to be a much better choice than a soft drink or one of those fancy coffee drinks from Starbucks or the like. Although there is an interesting fact about coffee…

Coffee itself contains no calories! Which would be a major win in the battle against liquid calories, but can be a major diet buster when combined with cream, whipped topping or syrup (so, basically, just the way I like it). The average “deluxe” coffee drink can contain anywhere from 700 to 1,200 calories, and may also have as many as 25 grams of fat. There are actually a ton of great coffee mixers that can make the brew more tasty, all with their own calories to be considered. But here’s a hot tip: cold brew. Cold brewed coffee isn’t any harder to make, but it has one major benefit: it’s less bitter than traditionally brewed coffee. The upshot here is that sugar, cream, whipped toppings and other coffee enhancers can be used less or not all, because you won’t need to cover up the bitter, acidic taste.

Adding a splash of gravy to potatoes or meat may seem like just what you need for dinner to really shine, until you learn that a cup of gravy has between 100 and 150 extra calories. Not only that, but most gravies are also high in sodium and carbohydrates, which are two other things you should keep an eye on whenever you’re dieting.

Liquid calories can easily add up if you are not paying attention, which is why you should be aware of them. Contact us if you think the calories are catching up with you and we’d be happy to talk to you about fitness, heath and how we can help get you into the shape you’re looking for.

Interested in a Free 7 Day Trial Membership?
Find out More! »